From the godfather of cyberpunk, Juicy Ghosts is a fast-paced ride, centering on commercial telepathy and immortality. Set amid the chaos of something very much like the 2020 US presidential election and the ensuing attempt at a coup.  Hip, bright, and darkly comic, with startling science, engaging dialog, and generous helpings of Rucker's SF surrealism. Romances interweave the tale. This book is important.
Notes for Juicy Ghosts is the length of a novel, and includes illos and writing notes from the two years it took to write Juicy Ghosts. Browse the entire Notes for Juicy Ghosts as a free online webpage as well.

"Rudy Rucker's great new novel, Juicy Ghosts, represents a wise man working at the peak of his powers. Ripe with satire, humor, empathy and tough-minded political hardball, this book exhibits all the shining Rucker talismans, from telepathy to immortality, from gonzo shenanigans to chaotic redemption. With a stellar cast of high-tech lowlifes, male and female both, dialogue that crackles and amuses, and a fire in its belly, Juicy Ghosts outlines a path into our mutual future that is painted in rainbow bioluminescent neon colors." --Paul Di Filippo, author of The Summer Thieves. See also Paul's online review for Locus.

"Juicy Ghosts is some of Rudy's best stuff, it flows wonderfully, and the characters are great. A thing of absolutely breakneck pace, with high energy throughout. Nonstop insanity." -- Marc Laidlaw, author of The Gargoyle's Handbook and writer of the videogame Half-Life.

I started writing Juicy Ghosts in early 2019, as a reaction to Donald Trump’s repeated remarks that he planned to be a three-term president.  I began with a short story called “Juicy Ghost.” Rebels bring down an insane, evil President who’s stolen an election. I felt that I had to write it.

None of the big zines would publish my story, so in October, 2019, I put it put it on my blog and in the small ezine Big Echo. Self-publishing the story had a samizdat feel to it. I kept on squawking, growing the story into the novel Juicy Ghosts. While I was writing the final chapters, the January 6, 2020, attack on the Capitol took place—reality was fast overtaking my prophecies.

So, yes, Juicy Ghosts is a tale of political struggle—with a creepy pandemic thrown in. But I was also going for romance and gnarly science, with many scenes I consider to be funny. I tried to write in the loose, say-anything style of Thomas Pynchon’s Gravity’s Rainbow. The majority of the narrators are women.

The SF in Juicy Ghosts involves commercial telepathy that can transmit emotions. I ring a new change on software immortality by supposing that  that  a digital soul needs to be linked to a physical body.  It’s not enough to be a ghost—you want to be a juicy ghost!

My agent sent the Juicy Ghosts manuscript to a few publishers, to no avail.  One of them remarked that the political assassination stuff was too much. So I've self-published the first edition of Juicy Ghosts via Transreal Books, along with the companion volume Notes for Juicy Ghosts.

In order to get something resembling a book advance, I ran a Juicy Ghosts Kickstarter campaign, which turned out very well. I get the feeling that people are hungry for a novel that features the eradication of an evil President! Profound thanks to my backers and to the legions of readers who keep my career alive.  You’re wonderful.

Here's a list of my worthy backers, sorted by the alphabetical order of the first letters of  their screen names. 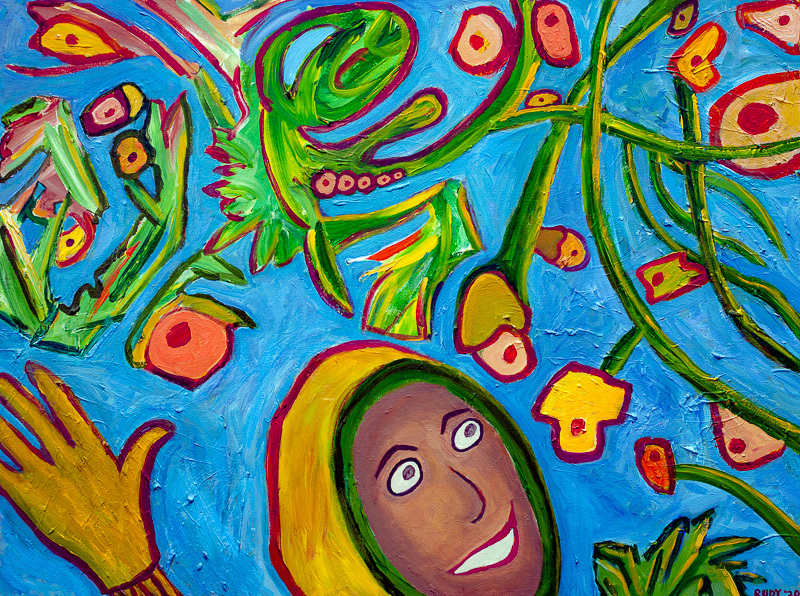